How to Land a Killer Dallas Apartment for Less

How to Land a Killer Dallas Apartment for Less 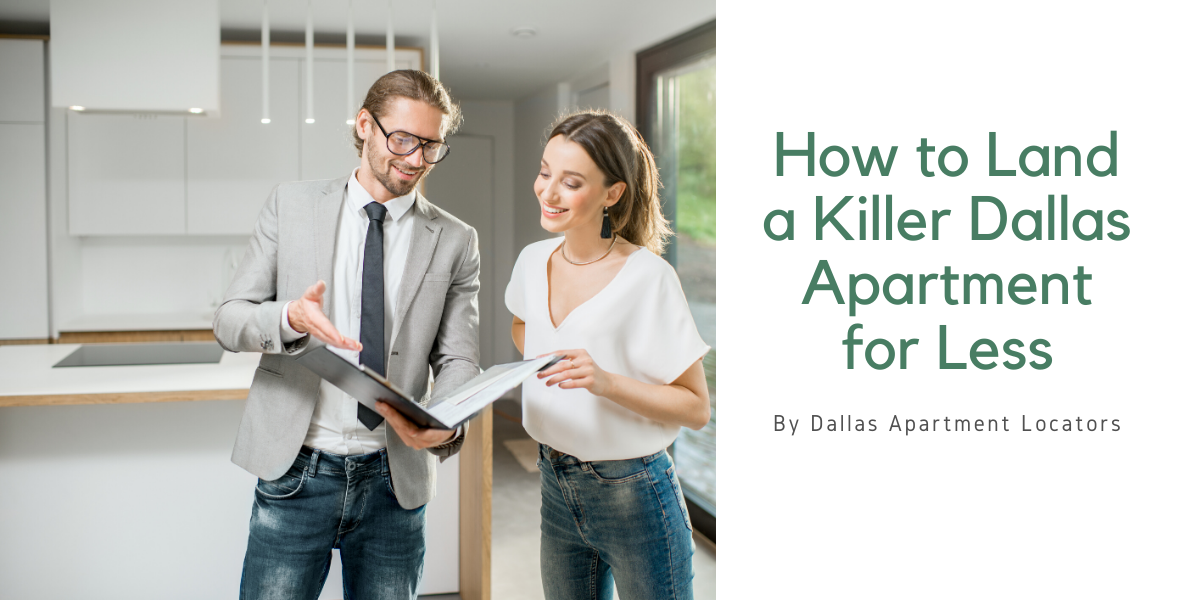 There’s nothing better than snagging a great deal. So, what if you could land a kickass Dallas apartment and save money at the same time? Yes, it is possible to get a good deal on an apartment, whether it’s a one-time upfront savings or a lower monthly rate. That being said, there is a bit of a science to it. If you’re in the market for a new place (or you just want to know the tricks of the trade for future reference), here’s the inside scoop from our experienced apartment locators.

Rent costs vary based on a variety of factors, many of which are tied to the physical location of the property itself. Obviously, the more affluent the area, the higher the price tag will be on the available apartments. That’s not to say you can’t still land a good deal in a nicer area. You just may have to be a little more diligent. But if you’re on a budget, researching which Dallas neighborhoods have the most favorable rent rates may be worth the extra effort.

Understand that prices may fluctuate.

Many property managers rely on software that prices apartments dynamically, similar to flights and hotel rooms. Certain factors, such as timing and demand surges, play a role in how much a particular apartment unit might go for at any given time. Dynamic pricing enables property managers to enter various criteria, such as occupancy rates, nearby rent prices and unit location, and automatically generate the best rate. Keep in mind, however, that this is just a baseline. There may still be some wiggle room.

Try to time your move.

Not everyone has the luxury of waiting to move until the perfect time, but for those who do have that kind of flexibility, it may be well worth your while. For instance, research indicates that the months between November and February tend to be the slowest as far as the rental season in Dallas is concerned. That means if you time your move during that window, chances are you’ll get a better rate on your rent as well, since landlords and property managers will be scrambling to fill vacancies.

Be prepared to negotiate.

One of the best kept secrets in the Dallas apartment scene is that rent rates can sometimes be negotiated. Even if you can’t convince a landlord to charge you a lower monthly rate, you might be able to work out a deal where you get a discount on the first month or perhaps have certain fees waived, such as application or amenity fees. Again, apartment owners want to maximize occupancy, and many are willing to compromise in order to do so. In any case, it certainly can’t hurt to ask.

Lean on a pro.

The good news is, getting the best deal on a Dallas apartment isn’t something you have to figure out on your own. In fact, if you partner with the right team, they can negotiate the best rate and/or perks on your behalf. Our Dallas apartment locators have established relationships with property managers all over the DFW area. We also know about great deals, some of which are not even advertised to the public. And we don’t charge a penny for our services. Ready to get started? Get in touch today!

Ready To Connect With An Agent?